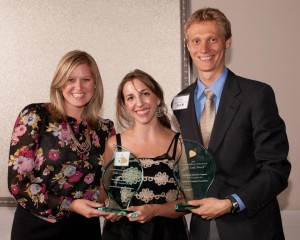 (DENVER, CO) – At the 2011 Gold Leaf Awards ceremony, hosted annually by Colorado Healthcare Communicators, American Transplant Foundation won big.  Their 2011 cycling team event – Team Transplant – was awarded “Colorado Nonprofit Project of the Year” and was also the only project to win a Gold Leaf in the “Community Relations: Ongoing” category.

“Our Team Transplant supporters are such an incredible group of people.  It’s their passion and enthusiasm that make our cycling event possible, and on their behalf, we are so excited to accept this award,” said Anastasia Darwish, American Transplant Foundation’s Executive Director.  “We look forward to reaching even more people with our successful communications approach to advocate for organ and tissue donation with Team Transplant 2012.”

The sold-out awards event, held at Magnolia Hotel in Downtown Denver, was attended by representatives of major companies and organizations in the healthcare field from all across Colorado.  The other groups to win Gold Leafs were Porter Adventist Hospital, University of Colorado Hospital, Rocky Mountain Health Plans, Children’s Hospital Colorado, The Colorado Health Foundation, and Delta Dental of Colorado.

The American Transplant Foundation is a national nonprofit organization that works to increase the donation of organs and tissue to reduce the growing list of men, women and children who are awaiting a lifesaving transplant.