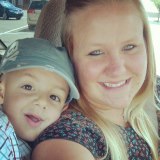 “Hi my name is Shelly. I am a single mother to an amazing, miraculous 5-year-old boy named Lucas.

Lucas has survived a brain condition called hydrocephalus which has committed him to a life long VP shunt. At 12 months old Lucas was diagnosed with stage 3 hepatoblastoma (a very rare liver cancer). Lucas has had two liver transplants at 15 months old. After his body rejected his first liver transplant right on the operating table, I donated a section of my liver to him 10 days later.

At age 3, Lucas suffered a massive stroke. Doctors told me to say goodbye to my son because he would have no chance of survival from the stroke he suffered, and even if he did, he would be completely blind and never walk again. Lucas survived and hasn’t stopped fighting.

Lucas is now 5 1/2 and he can see walk, run, talk, eat, play and jump! I gave my liver to him and in return he gets to give me the brightest most amazing days of my life just by being alive and being my best friend!”