Blog - Latest News
You are here: Home1 / News2 / Husband uses tailgate to find kidney for one of our ATF Mentees! 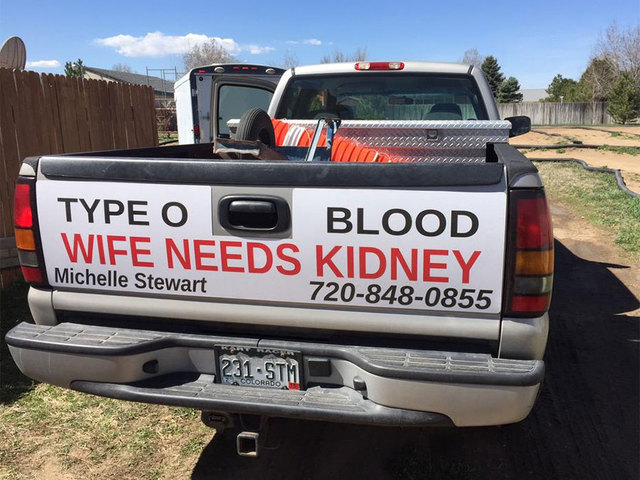 HENDERSON, Colo. – A photograph taken by chance sent in a whirlwind of support to Michelle Stewart, a woman desperately in need of a kidney transplant.

Stewart has Systemic Lupus Erythematosus, an autoimmune disease that she has been battling for 30 years. It began when she was 13-years-old. She has survived a stroke, a seizure, chemotherapy, two comas, and temporary paralysis.

Stewart’s husband, Robert, has been working tirelessly to find a kidney for his wife after Dr. Alexander Wiseman, Medical Director of the Kidney and Pancreas Transplant Program at University of Colorado Hospital said, “the more time she spends away from dialysis, the better.”

Robert Stewart created an advertisement on the tailgate of his truck in the hopes of providing his wife with a transplant. A construction worker also told 7NEWS that he has been passing out flyers, sending emails and getting involved in scheduled programs. 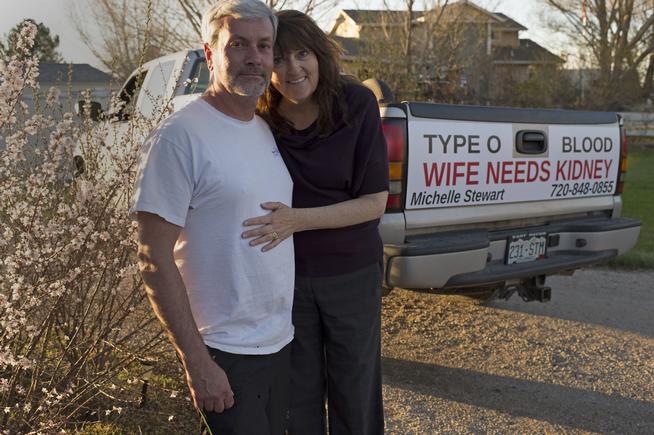 What started out as a hopeful plea, has turned into a countless number of people calling, willing to be tested and donate if a positive match. Understandably he is frustrated that their insurance will only pay to have one person tested every 5 weeks, but in all this craziness Elle Powell of the American Transplant Foundation says she’s impressed by the pro-activeness of the Stewart’s.

“Never in a million years would I expect some guy in traffic to take a picture of it and have it just go crazy all over the web,” Robert said. “It’s like, dude, wherever you are, I want to thank you personally.”

Watch the video and read the article from Denver Post here.

Denver Post: Importance of being a live donor American Transplant Foundation Mentee and Husband have story published in USA...
Scroll to top