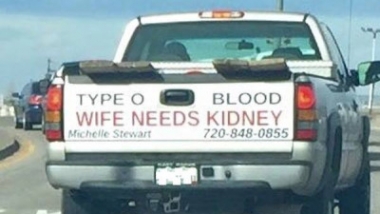 DENVER – After the tailgate of Robert Stewart’s went viral on the internet (read more “In the News” below), Michelle Stewart was able to meet the man who posted the photo online. Fox 31 visited our one-of-a-kind event to interview the pair as they met on live television! What a fantastic video showcasing the Second Chance at Life Art Exhibit Premiere Party and the wonderful moment when Michelle and Robert were able to meet Matthew Wyatt!

“All I did was post a picture, a few mouse clicks, next thing I know … it’s this,” said Matthew Wyatt, just moments before he was introduced to the woman he hopes will soon have a new kidney.

The American Transplant Foundation hosted a fundraiser on Thursday to bring these two unlikely strangers together.

Telemundo visits our Second Chance at Life Exhibit and Broadcasts about Organ Donation en Espanol
Denver Post: Importance of being a live donor
Second Chance at Life Art Exhibit Premiere Party
American Transplant Foundation Mentee and Husband have story published in USA Today!
Video of Michelle and Bob’s story on CBS This Morning
Husband uses tailgate to find kidney for one of our ATF Mentees!
0 replies