David Landsberg of the Society for Organ Donor Awareness launched the national Donors Rock Ride in Texas on July 4, 2011, the anniversary of his kidney transplant. David cycled 50 miles in 50 states in 50 days to raise awareness for organ and tissue donation! Members of our Team Transplant joined him in 2011 as he rode through Colorado.

David passed away in July of this year. Below is a tribute from David's older sister, Leslie, about his amazing life and his advocacy for organ donation. 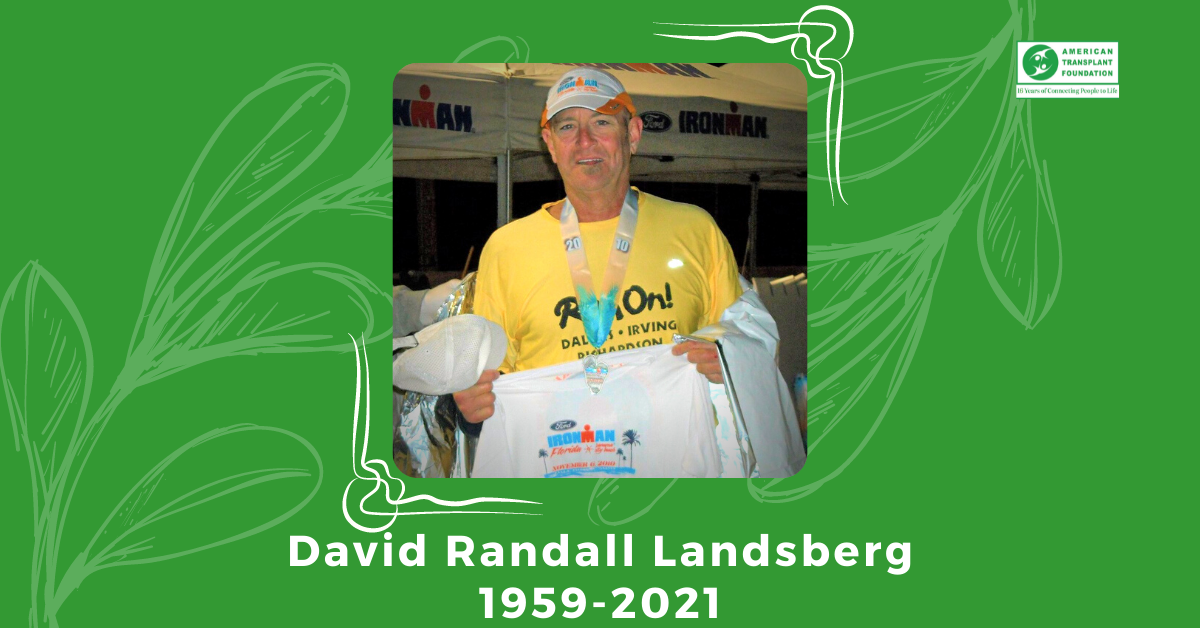 David’s life was riddled with health challenges. In his 20’s, he was diagnosed with Bilateral PKD (Bilateral Polycystic Kidney Disease) He took AMAZINGLY good care of himself, reached out for all kinds of unconventional treatments, everything you can imagine. By the time he went into full renal failure, the physicians at Southwestern Medical Center and Parkland had never seen a living person with kidneys as large or engorged as his were. Due to infection, he had to have one removed and then the other, and was put on the kidney transplant list.

While he was on the transplant list, David is the only person, that anyone knows of, who completed a triathlon with no kidneys and no spleen. On July 4th, 1999 he received the kidney that would keep him alive. After the transplant, David completed an Ironman. A feat for any human, let alone someone with one kidney. Another amazing accomplishment after all he had gone through.

He then spent much of this time speaking to other dialysis patients about life on dialysis. He used the gifts and talents he had to educate the general public about the importance of organ donation.

David would speak to anyone who would listen. He was, at that time in his life, a massage therapist, and the director at Texas Massage Institute. He was the ‘Poster Child’ for Parkland; his image was in the hallways for all to see. He gave a free chair massage in exchange for the recipient taking an organ donor card with them, just to think about it.

He needed to keep making his statement louder and louder in order to be heard. Otherwise, David was ‘just a guy’. He created what he called 50/50/50: To ride his bike 50 miles around the capital of each State, in exactly 50 days. David was interviewed on radio and television, as this was such an outrageous thing to do… no one had ever done this… and to date, no one else ever has.

David would ask “Did you know that if one was to donate every single body part from veins, to skin grafts, to earlobes and eyeballs you could impact around 75 lives?”

So, I write this as a tribute to David. You could be giving someone else the gift of life.

At the time of his passing, David still had a fully functioning kidney, however he had developed and ultimately died of Glioblastoma. A fatal cancerous brain tumor.

Each of us has only one life to live but many lives to give.

Rest in Peace my dear brother. You WILL be remembered.