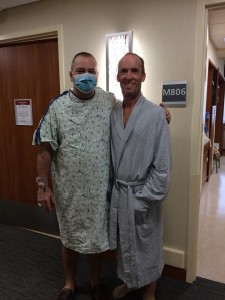 Our story started on a fall Saturday afternoon in the lunchroom at Caledonia High School. Parents of the girls’ high school volleyball team were sitting around a table grazing on snacks that were actually meant for the girls. There were various conversations taking place, including some not so positive comments about what had started out as a winless league record. But, it was the first year under a new head coach who brought great enthusiasm and hope.

I happened to overhear (not eavesdrop of course) one of the senior parents talking about how excited she and her husband were because he had finally added to the kidney transplant waiting list. We discussed the situation further, and I left that day with the contact info for the office they were working through at Mercy Health St Mary’s Kidney Transplant Center in Grand Rapids.

Not having a lot of knowledge on the subject, other than knowing that my college roommate donated a kidney to his sister many years ago and was never limited in physical activity (ie he runs marathons and sprint triathlons), I did a lot of research over the remainder of the weekend. The article that stuck with me the most was one that stated that the average life span of a person on dialysis was only five years. Five years? That’s it? The same thing kept going through my mind – my new friend has a senior in high school. That means he could be dead before even turning 50. I kept thinking about his daughter. How he might not be around to walk her down the aisle, or to ever see and play with his grandchildren.

I contacted Nichole at the center the following Monday to find out how to get the process started. She was incredibly helpful at addressing all of my questions and concerns, and we began what would become a three month trek to determine compatibility.

During part of the interview and testing process, my patient advocate at St. Mary’s, Justine, advised me of the Patient Assistance Program offered by the American Transplant Foundation. I didn’t put a lot of thought into it at first. I think like most, I didn’t want to feel like I needed help from anybody. I have led a blessed life; and I can take care of my own family. Save the money for those whose decision to donate would actually be based on the outcome of their application.

Time passed, tests passed, and although not a perfect match, the doctors all agreed we were a go. Finally. And thank God.

Up to this point, I had done everything I could not to make this about me. Against his wishes, I asked Bruce (the recipient) not to divulge my name. It was about making him better and I didn’t want people to think I was doing it to look like a hero or for handouts of my own. I knew that, despite being self-employed and business being slow, we would survive financially if I took a week off because I was sure I’d be back at it despite everybody telling me I’d be down for at least two weeks. I had just run 26.2 miles in October – this can’t be that hard.

But while I kept the family quiet, what I didn’t realize was that I was actually making it about me. My church family had no clue. Our closest friends didn’t even know. That meant, while I didn’t feel like I needed the support and attention, my wife had nobody other than family to talk to about it, nobody at church to offer prayers.

And until we discussed it further, I hadn’t really considered the stress she was feeling from a financial standpoint. She was doing what she could to pick up extra shifts when possible. But being a nurse and probably more in touch with reality of a 49 year old body, she knew it was very likely that I’d be out longer than I had planned, and that I’d need her around more than I was expecting. So her going to work at all, let alone picking up extra shifts, for the first couple of weeks was probably not going to be possible.

While the approval did not have an impact on our decision to donate, it gave us peace of mind knowing that we wouldn’t have to rush so quickly back into the real world, overdo it, and be out even longer due to complications. And that has been a big relief to both of us, especially as we sit here today paying the monthly bills. We can’t thank the Foundation enough.

About that same time, I agreed to let others know about the surgery and was overwhelmed with the love, well-wishes, and prayer offerings we received from friends, family, old friends I haven’t seen in 30 years, as well as people I’ve never met before. Wow.

The surgery went better than expected. The staff at St. Mary’s was incredibly helpful and comforting. They even put us in rooms next to each other which allowed us to get out and take hall walks together. We ended up going home the same day (a day earlier than expected for him). We continue to do well and now trade texts and go to lunch occasionally. Bruce’s family and friends have been an incredibly supportive group over this journey.

It has been a longer road back than expected. I started walking on the treadmill in week 3 and was only able to make it a couple of miles before having to stop. That was pretty shocking. I am now up to 4 or so, so it’s nice to see some improvement. But I’m not sure I’ll be ready for the Fifth Third River Bank Run (25k) again this year (in May), which had been a goal of mine from the start.

An even greater vision was to maybe partner with the Kidney or Transplant Foundation in a booth at the expo prior to the event to register donors. You see, something I’ve found after running organized races for a few years now is that most runners are of a different breed. They are helpful, incredibly encouraging, and willing to go the extra mile (haha) for a complete stranger on and off the course. While it is a competition, for most it’s a competition against the elements – the course, the weather, our own body’s limits.

This event could be a platform to inform these people that there are 75,000 plus people out there in need of one healthy kidney while most of us run around with two; to help people learn that donating a kidney can be a life changing experience for someone else while not limiting their own life. What better place to do it than at an event filled with so many healthy, generous, giving people. If we could reduce that number by 1%, 100, or even just one; that’s one more person who will be able to attend those weddings and get to know those grandchildren.

But then again, whoever would have thought, considering the odds, that small talk at a volleyball tournament in a small town could have the impact that it did.

I guess maybe it was a pretty good season after all.

My family thanks you for your incredible generosity.