You are here: Home1 / Dedicated to saving lives2 / Founder’s Story

Steve Farber’s transplant journey inspired him to create the American Transplant Foundation. His story began when he was a toddler and suffered kidney problems. Miraculously, his failing kidneys began functioning again, and he recovered.

Steve grew up in a lower-middle-class neighborhood in Denver, Colorado. After law school, he co-founded Brownstein Hyatt Farber Schreck, a highly successful law firm. Yet Steve’s success did not help him when, at age sixty, his kidneys began to fail for the second time.

Steve’s choices were to find a kidney, go on dialysis or die. He faced many obstacles in his search for a solution. He learned that his community stature could not be leveraged to move him up on the organ waiting list. He learned that people can pay for transplant organs in other countries, and he nearly went to Turkey to buy a kidney, but ethical and safety concerns held him back. 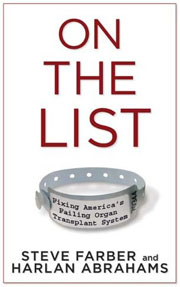 Steve finally accepted the gift of life from his eldest son Gregg, who donated a kidney to his dad in 2004. The journey changed Steve. He co-authored On the List with Harlan Abrahams, a book expressing his goal of eliminating our nation’s tragic shortage of organs for transplantation.

Steve strived to help families navigate difficult organ transplant issues and the personal family challenges that came with it. He worked toward new legislation to create better policy around transplantation in America.

Steve Farber’s transplant journey inspired him to found the American Transplant Foundation together with Heidi Heltzel and Dr. Laurence Chan. It’s unique, because it does not focus on particular organs like kidneys or hearts or livers, nor does it limit its mission to enhancing donor awareness. The American Transplant Foundation goes beyond donor awareness to tackle the tough policy issues that must be solved to eliminate the gap between the need for organs and their supply.

Steve passed away on March 4, 2020 but his legacy continues on. To date, the American Transplant Foundation has helped save 1,579 lives and provided over $1,000,000 in direct patient and family support nationwide. Over 300 mentors who speak 12 languages have helped walk with others going through the transplant journey, and potential living donors have been given the tools to be able to save a life. The Steven W. Farber Transplant Award Fund was also established in his honor. And among our proudest victories, legislation has been passed to support living donors and their families. None of this would have been possible without his vision.

Watch the video below to learn more about the journey to creating the American Transplant Foundation.

The Foundation is honored to present Steven and Gregg Farber with the Transplant Hero Award for their outstanding impact in the transplant community. In 2004, Gregg Farber made the decision to become a living kidney donor for his father, Steve, which began a lifelong journey to save lives for their entire family.

Steve committed to saving the lives of others in 2005 when he formed the American Transplant Foundation. This organization has changed and saved hundreds of lives by providing education and financial support. As a result, transplant patients, living donors and their families in all 50 states have been provided lifesaving assistance.