Joel Prince, a 1+1=LIFE mentor through American Transplant Foundation, donated a kidney to his adoptive father in March of 2012. 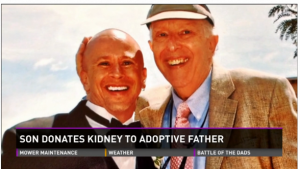 The recipient, Richard Prince, was diagnosed with bilateral polycystic disease in his 40s. Over the years, cysts formed on his kidneys and they slowly started to fail. In January of 2012, Richard’s doctors told him he would have to go on dialysis or have a kidney transplant. Joel immediately volunteered to be the donor, but his dad said no. Richard was worried not only because Joel has three young sons, but also because Joel’s wife only has one kidney.

Joel worked hard to convince Richard to change his mind. After months of testing, Joel found out he was a match. He then flew from Denver to Chicago, where his dad lives. They both underwent surgery and are now doing great! Joel is grateful he was able to give his dad such an amazing gift- a gift that keeps on giving.

An Intimate Evening with the New Mastersounds Benefiting the American Transplant... Fight Fire with Beer Fest and BMW Championship Tournament
Scroll to top