It’s been 13 years since Denver attorney Steve Farber got the news that he would need a kidney transplant, but he recalls it like it was yesterday.

“I went to the doctor. The doctor gave me a physical. He called me up and said, ‘I don’t like what I see. Your kidneys are not functioning well. And we should talk about your future, or lack of future,’” Farber said. 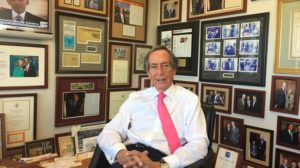 He didn’t know it that day, but his future included saving 480 lives — so far. After his own kidney transplant from his son Gregg, Farber started the American Transplant Foundation, which works to find living donors for people who need organ transplants.

Over the past decade, ATF has become the only nonprofit in the country that provides assistance to transplant patients and living donors by reimbursing them for lost wages, providing education, mentorship and access to lifesaving medication, said Anastasia Darwish, the foundation’s executive director.

Saturday, Farber and the foundation will celebrate the foundation’s 10-year anniversary with its annual event, “Transplant Hero Awards.”

Farber recalls how the idea for the foundation came to him: When Farber, founding partner of Denver-based law firm Brownstein Hyatt Farber & Schreck, got the news about his failing kidneys he went to several doctors. He was told he should consider getting on the transplant list.

Today there are 121,342 people in the U.S. on an organ donor list, and some people wait years. Ninety-five percent of those on the list are waiting for a kidney or liver organs.

“I took my three sons on a trip and broke the news that I was going to have to have a transplant. I’m going to try to get on the list,” he told them.

Dozens of people – friends from across the country – called to say they would give him one of their kidneys. Meanwhile, his son Gregg was tested and found out he was a perfect match.
It was a grueling decision for him to accept his oldest son’s kidney.

After the successful transplant, Farber went to work on launching the foundation. He said that when people offered him their kidney, it showed him the goodness in people and he thought there had to be a way to connect those waiting for a transplant with living donors.

“I wanted to save lives,” he said.

Along the way Farber co-authored the book, “On the List” with Harlan Abrahams, a book about his goal of eliminating the shortage of transplant organs. He pushed for a change in the law that makes it easier for living donors to make the decision to donate an organ.

In 10 years, 480 people have been taken off the waiting list and saved by living donors. He had never contemplated those numbers when he launched the foundation.

Now, he gets about five calls a week, people calling with their stories.

“I need a transplant and somebody told me you were the guy to call,” he said.