An 11-year-old Highlands Ranch girl who was born with bilary atresia and spent the first seven months of her life in and out of Children’s Hospital Colorado before receiving a liver transplant is the recipient of the American Transplant Foundation’s Volunteer of the Decade award. 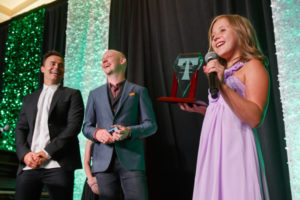 Joe King and Isaac Slade are smitten by the charms of Vienna Danna, recipient of the Volunteer of the Decade Award. The Transplant Hero Awards, benefiting the American Transplant Foundation, at The Ritz-Carlton, Denver, in Denver, Colorado, on Saturday, June 11, 2016.
Photo Steve Peterson

Vienna Danna, the only infant to receive a liver transplant in Colorado in 2005, accepted the award from Joe King and Isaac Slade of The Fray during the ATF’s Transplant Hero Awards Gala on June 11 at the Ritz-Carlton Denver. The two had just finished an acoustic performance that included the band’s popular “How To Save A Life.”

The $522,000 that was raised, said executive director Anastasia Darwish, will be used to assist transplant patients and living donors by reimbursing them for lost wages during their surgeries and providing access to lifesaving medications. The money also will help fund ATF efforts to reduce the ever-increasing number of people waiting for a transplant by encouraging others to become living donors.

In addition to The Fray, guests also enjoyed the talents of mentalist Oz Pearlman and an after-party with music by Tracksuit Wedding, who arrived at the Ritz-Carlton by way of Red Rocks Amphitheatre, where they had opened for Big Head Todd and the Monsters.